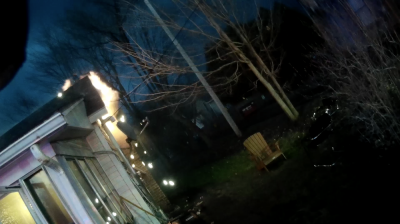 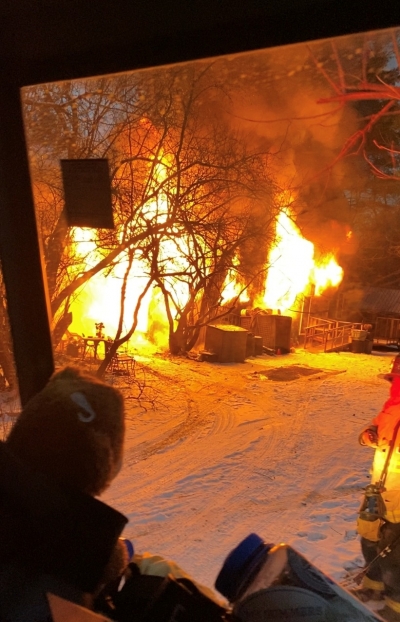 On Friday, December 10 at approximately 1624, the Essex Junction Fire Department was dispatched to respond mutual aid to Horseshoe Drive in the Town of Williston on the second alarm for a structure fi...
➜
Structure Fire on Roscoe Court 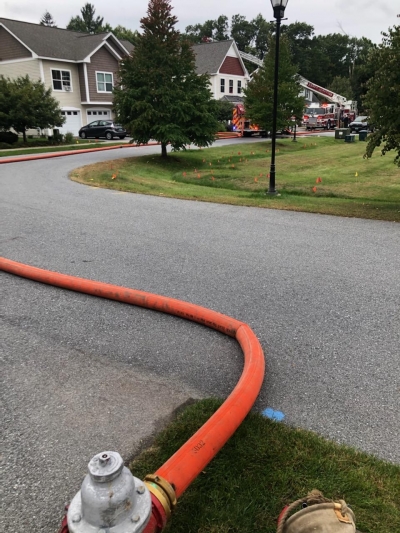 This year's Essex Rotary "Service Above Self" Award was awarded to our Assistant Chief Tim Wear. Tim has spent over 20 years with the EJFD, always being a top participant in trainings an...
➜
News
Promotions & Retirements

On behalf of Fire Chief Gaboriault, the Essex Junction Fire Department is proud to announce the following promotions and retirements effective 01/01/2020:

-In the fall of 2020, Fire Police Robert Trudo retired from the Department after close to 50 years of service

-Captain James Kellogg to the rank of Second Assistant Chief

-Lieutenant Daniel Macaig to the rank of Captain

-Engineer Daniel Mullin to the rank of Lieutenant

Early in 2020, Chief Wear announced to the Department that he would be retiring at the end of the year after 40 years in the fire service.

Chief Wear began his fire service career in 1980 in his hometown of Canaan, New York following in his father and grandfather’s footsteps. In early adulthood, he moved to Richmond, Vermont in order to begin a career with General Dynamics. He served with the Richmond Fire Department for several years, rising to the rank of Captain. Chief Wear next moved to the Town of Colchester, where he served with the Colchester Center Volunteer Fire Company, rising to the rank of Assistant Chief.

Chief Wear has truly been an inspiration to every single member who has come through the doors at EJFD. He has always maintained an extreme level of dedication to the success of the department, always being in the top five responding members each year in regards to fire calls. As an example of this, since EJFD began using Firehouse Reporting Software in 2004, Chief Wear has responded to 2,721 emergency calls for service. He was also an EMT with the department, serving on EJFD First Response for many years and responding to many EMS calls. It was well known that on nearly every Monday night throughout the entire year, Tim could be found at Monday night training sessions. He rarely missed training, generally only if he was ill or on vacation.

The retirement of Chief Wear will undoubtedly leave a void in the EJFD and big shoes to fill. We will miss him around the firehouse, always pushing the members toward excellence and cracking the occasional joke, even if sometimes we can’t tell if he is serious or not.

`Chief, it has been an honor for every single one of the members of this department, past and present, to serve under your leadership. We wish you well in retirement and hope you enjoy not having a pager on for the first time in 40 years!

-Robert “Bob” Trudo announced his retirement from EJFD in September of 2020.

Bob lived in the Village of Essex Junction for a majority of his life, raising his family here. Bob also spent many years working for Chittenden Bank as well as in Real Estate.

Bob served EJFD for approximately 52 years, rising to the rank of Captain. Bob is proudly one of the longest serving members of Essex Junction Fire. Firefighting has been a family tradition in the Trudo family, with Bob’s son Bruce currently serving on the department (and has been for over 45 years), Bob’s son Brian serving in the 1980s, as well as Bob’s grandsons Kyle and Josh and grand daughter in-law Sarah.

Bob responded to a high volume of emergency calls each year, serving in the role of Fire Police for roughly the past 30 years. Bob took great pride in ensuring our fire scenes were safe for our members operating on the scene as well as the public traveling through the area. Whether it was 0 degrees and snowing or 98 degrees and sunny, Bob would always be there to answer the call and ensure traffic control duties were taken care of. When not directing traffic on a scene, Bob could be found at the firehouse sweeping the bay floor or cleaning apparatus, always taking great pride in the equipment. Bob also made sure to never miss an association meeting, also taking pride in the association and its mission to support the department.

Bob, we will miss you around the firehouse and hope you enjoy a much deserved retirement! 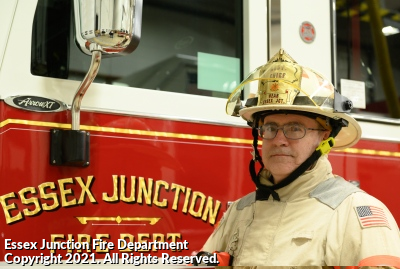 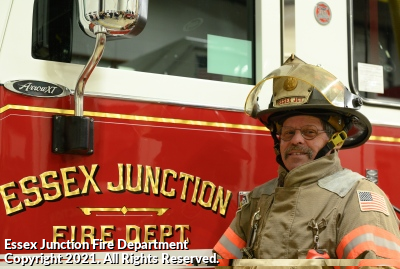 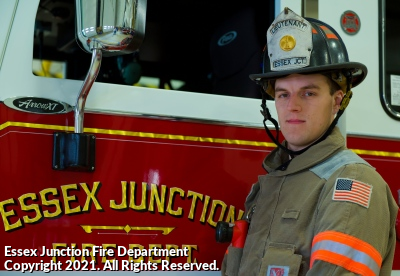 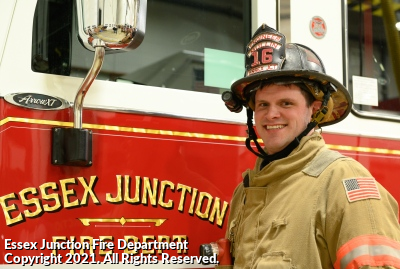 Newly promoted Lieutenant Mullin
×
1 of 32 of 33 of 3
46 entries in the News
2021 Year in Review
The Essex Junction Fire Department had another busy year in 2021 between training events, emergency incidents and community events. This year looked a bit more "normal" for us as far as being able to host our banquet and attend some smaller events in the community.
➜
2020 Year in Review
While 2020 was certainly a unique year for everyone here at EJFD and everyone across the community, the country and the world, the dedicated professionals of the Essex Junction Fire Department still turned out to train to excellence nearly weekly and answer emergency calls for service anytime of day...
➜
Promotions & Retirements

On behalf of Fire Chief Gaboriault, the Essex Junction Fire Department is proud to announce the following promotions and retirements effective 01/01/2020:Retirements:-Second Assistant Chief Timothy Wear will be retiring-In the fall of 2020, Fire Police Robert Trudo retired from the Department after ...
➜
Service Above Self Awards 2019

This year's Essex Rotary "Service Above Self" Award was awarded to our Assistant Chief Tim Wear. Tim has spent over 20 years with the EJFD, always being a top participant in trainings and call attendance.
➜
EJFD & EFD Firefighters Working Together 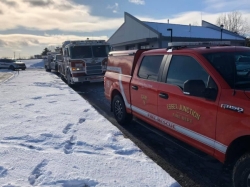 We at the Essex Junction Fire Department want to thank all of you who have donated to Operation Fire Cuffs 2019. Thursday, members from EJFD and surrounding departments were able to drop off so many toys.
➜
Fall Chittenden County Basic Course EJFD Graduates 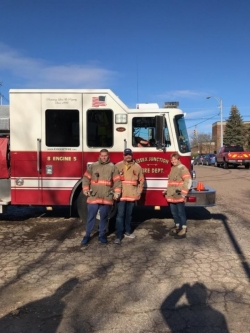 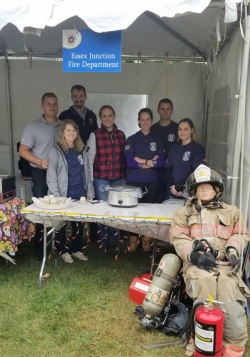 Our members and families are supporting the Williston Chowder Challenge today. We put together a Cajun Shrimp chowder for this year. Come out and support the Williston Food Shelf and Williston Police Officer's Assoc.
➜
Passing of Active Member Chuck Barry Sr.

It is with profound sadness that the Essex Junction Fire Department announces the passing of active member, Charles "Chuck" Barry.Chuck has actively served the Essex Junction Fire Department for the past 34 years.
➜
2018 Year in Review
2018 Year in Review As 2018 comes to a close, we wanted to share some of the accomplishments and responses from the past year.2018 was an exciting year with the delivery of our new Engine 7, our new primary pumper for firefighting in the Village.
➜
History of Painesville Hose Company

This Wednesday, we visit the name of our second due engine, Engine 21 or; "Painesville Hose Company." Engine 21 is our 1997 E-One pumper that responds as the second engine out of EJFD and also responds as our mutual aid engine to surrounding communities.
➜
History of Hubbells Falls Engine Company

Have you ever wondered why our apparatus are numbered the way they are? Why our station is located where it is? Why our department identifier is 800? Have you ever wondered some more about the history of the EJFD? Starting today and for the next few Wednesdays, the EJFD will be posting "tid bit...
➜
2017 YEAR IN REVIEW
HERE IT IS! YOUR ESSEX JUNCTION FIRE DEPARTMENT YEAR IN REVIEW2017 proved to be one of our busiest years on record for emergency calls for the department. EJFD responded to a total of 538 calls for service.
➜
OFFICER PROMOTIONS 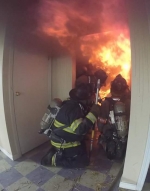 Member login
Links
Essex Junction Fire Department Facebook
CO Risk levels
Chart telling of the risks of Carbon Monoxide by level and time.
Colchester Technical Rescue
Our primary Technical Rescue agency for any technical rescue situations within our response area. Our apparatus carry the necessary equipment to set up a full rigging system utilizing the stokes basket to remove an injured person from a below grade incide...
Advertisement

This site has been viewed 202,669 times.
Calls
News
Pictures
Apparatus
Maintained by the members and staff of Essex Junction Fire Department. Designated trademarks and brands are the property of their respective owners. Copyright © 2006-2022. YourFirstDue Inc. All Rights Reserved. Content on this web site is supplied by Essex Junction Fire Department. YourFirstDue Inc. cannot be held responsible or liable for any content, text, pictures, or any other media found on this web site.
Management login
Powered by